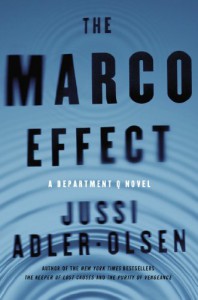 Poor Carl Morck. He's recently returned form Sweden & starting to believe Copenhagen slipped into an alternate universe while he was gone. His boss has suddenly retired, the replacement is an old enemy, Assad is acting weird & Rose...well, she's Rose. If he doesn't keep her away from the pile of cold cases, she might actually expect him to work on one.

Their last case left the staff of Dept. Q a bit battered & they're still recovering. But Rose convinces Carl & Assad to look at one concerning a ministry official who disappeared over 2 years ago.

His name was William Stark & the book opens with a prologue set in 2008 telling his story. It's a complex one involving government aid to a tribe in Cameroon, a Danish bank about to fail, fraud, embezzlement & murder. His appearance is brief but sets off a chain of events that play out 'til the last page.

The story then skips to a suburb of Copenhagen, 2010. Marco is a 15 year old Roma living a hellish existence. He & his "family" are illegals & part of a clan led by a self proclaimed leader named Zola. His rules are simple. You go out each day, steal, beg & pick every pocket before returning to the communal home. If he isn't pleased with the haul, you get the crap beaten out of you. Next day, repeat. All Marco wants is to go to school & have a normal family. Things come to a head one night & Marco has no choice but to run for his life.

In the spring of 2011 while Carl is trying to avoid the next case, Marco is living on the street. They lead separate lives, unaware they have one thing in common. For different reasons, both are digging into the disappearance & death of William Stark. Eventually their paths will cross but it's what happens in between that makes up the bulk of the book.

It's a twisty, complex story with no shortage of red herrings, hair raising chases & some truly reprehensible individuals. Most chapters are narrated by Carl or Marco so the reader follows both as they try to unravel what happened to Stark & why. There is a wide variety of characters, ranging from cops & bankers to a crew of African "boy" soldiers. The author gradually doles out clues & information between the action sequences that make this a quick, engrossing read.

I'm a big fan & enjoyed the chance to catch up with the gang from Dept. Q. Carl is his perpetually cranky self, frustrated by office politics & an abrupt change to his personal life. He lives with Morton & Hardy, his former partner who was paralyzed in a shooting that haunts Carl to this day. Assad has some neurological symptoms from an assault (last book) but is rallying & still capable of reducing any situation to an analogy involving at least one camel. Rose goes from Goth one day to Strawberry Shortcake impersonator the next, picking their case while allowing Carl to believe he's in charge. They're a trio of oddballs, incapable of working with anyone else but accepting of each other.

Olsen is adept at creating characters that strike a chord & in the case of Marco, you can't help but root for the poor kid as he tries to survive & find his slice of normal. And as for Zola, all I can say is karma's a bitch sometimes, right big guy?