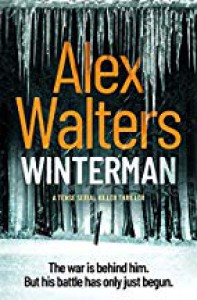 This intriguing mystery offers up a new perspective on the genre for this author. I’m a big fan of his DI Alec McKay books which are contemporary police procedurals. But here, he switches things up & delivers a story reminiscent of classic golden age mysteries.

It’s 1947 & all across England, people are struggling to rebuild their lives. The war may be over but things like food, fuel & jobs are still scarce. DI Ivan Winterman was not a soldier. Instead he fought his battles on the home front. One of these left him persona non grata among colleagues in London & as the book opens, he’s been banished to a small police post in rural East Anglia.

It’s not exactly a promotion to the big time. As the 2 local cops who have been holding down the fort fill him in, he realizes the most dangerous criminal he’ll run into will probably be a shoplifter. Well…you just know that’s going to change or we wouldn’t have a story.

Body #1 is barely recognizable as a little girl. Years of being buried in peat on the fens has preserved the bones but not much else. Same with body #2. Then a local man is murdered in his back yard. And he won’t be the last. So much for a quiet life in the sticks.

The first thing you need to know is this is not a flashy thriller. It’s a quiet, atmospheric police procedural that is richly evocative of another time & place. You get drawn into the lives of people who are dealing with the fallout of WWll. Like most insular communities, everyone knows everyone & their business. Or thought they did. As Winterman’s investigation progresses, the area is cut off by snow storms & the resulting isolation lends a claustrophobic feel which is hugely effective. Because of this, the story begins to read like a classic closed room murder mystery.

The author does a great job of providing a slow drip of clues. It’s an intricate puzzle & as pieces from the past & present fall into place, a horrible truth emerges. It’s not just a case of finding a killer, it’s about unmasking those who have been hiding in plain sight. Tension rises as the coppers begin to realize what they’re dealing with & the pace picks up considerably as they battle weather conditions to solve the case. It will also prove cathartic for Winterman on a personal level as he begins to let go of the past & see the chance for a brighter future.

It’s a smart, historical read that will especially appeal to fans of Agatha Christie or Anthony Horowitz’ “Magpie Murders”.