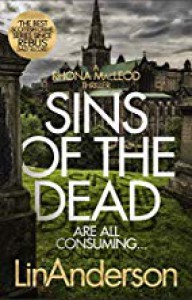 So today’s post is kind of a doubleheader. First up is my review then I’ll close with a short rant which may stray close to spoilerish territory so just a heads up.

When forensic scientist Rhona MacLeod gets called, it’s rarely good news. This time a body has been found in one of Glasgow’s tunnels. And it’s immediately clear the killer has gone to great lengths to get their message across. The second body turns up near Rhona’s home.  Same careful display, same props, same lack of forensics……there’s no doubt it’s related to the first.

Rhona does her best to provide clues for the police but it’s slim pickings. And maybe that’s a clue in itself. Everything points to someone with superior forensic knowledge. When one clue is tied to Rhona they all have to wonder. Is the killer taunting her or stalking her?

The gang is all back including DS Michael McNab. He & Rhona have a complicated history. They fell out after their last case which also resulted in a demotion for McNab. He’s been trying to keep his head down but when this case is assigned to DS Janice Clark, he can’t resist pushing his way into the investigation.

Just to amp up the creep factor, in alternate chapters we listen in as the killer makes their plans. There are also side stories dealing with the personal lives of the MC’s. The author does a great job of keeping you guessing. When it comes to suspects, you’re spoiled for choice. I had it narrowed down to three & kept looking for any hint that would sway me one way or the other.

One little niggle was a lack of information about the killer. Even after they’re revealed, we’re no wiser as to their background, motive or why they became fixated on Rhona. But that wasn’t the issue for me. Warning: mini-rant ahead.

I was all in on this story. Loved the Glasgow setting & got swept up in the investigation & the characters’ personal story lines. Then I hit the 90% mark. At this point Rhona makes a decision that can only be described as monumentally boneheaded. It brought to mind those slasher movies where a frisky couple looking for privacy come across an abandoned house. It’s usually isolated, has no electricity & one pipes up with something akin to “Hey, I’m going inside to check out that noise in the cellar by myself. You wait out here all alone in the dark. No worries, I’m sure it’s nothing to do with that serial killer who recently escaped.” Yup, that.

I realize authors take license to create suspense. My problem is when a character who has been portrayed as smart & experienced is dumbed down in order to create that suspense. It’s a personal peeve that yanks me out of the story & leaves me shaking my head. Maybe I lack the ability to suspend my disbelief that far but surely there are other ways to create the desired tension that allow the character to remain consistent. So that’s where my rating took a hit.

There you have it. The bulk of the story is a well paced, twisty tale that will keep you turning the pages. As a bonus, you also get a peek at the hidden history of Glasgow. If the above doesn’t bother you, go for it as there’s a reason this popular series has reached book #13.