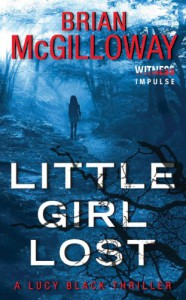 This is the first of a series from the author of the well known Ben Devlin books. It features DS Lucy Black, a smart young cop with a full plate. She's recently transferred to Derry to care for her ailing father. A former cop himself, he has Alzheimer's & is slowly disappearing into his own world.

Lucy has mixed feelings about being back. She grew up here during the height of The Troubles & it had a profound effect on her childhood. After their house was fire bombed when she was 13, her father left town with Lucy in tow. Her mother, also a cop, stayed behind & gave up all contact with Lucy. She's now the ACC in Derry & Lucy's boss. Because she goes by her maiden name, no one is aware of their relationship.

Lucy starts off in CID working on the abduction of Kate McLaughlin, the daughter of a wealthy local businessman. When a truck driver calls in after seeing a girl in the woods, hopes are high. Lucy responds & rescues her but it's not Kate. Instead she finds Alice, a little girl who is almost catatonic & half frozen.

She's quickly hospitalized but refuses to speak so Lucy sets out to identify her. To her disappointment she is seconded to the Public Protection Unit that deals with children. Her boss DCI Travers (a man best described by the word "ick!") lets on it's due to the bond she established with Alice but Lucy knows who is responsible...her mother.

And so begins the investigation. One girl without a family & one father without a child. The plot is complex & deeply rooted in the past. Memories are long in this area & although sectarian violence has largely ended, there are those who still carry grudges. Even Lucy blames the town's history for her shattered childhood.

As she & her new boss Tom Fleming dig, they discover a connection between the 2 girls that began 15 years ago when a bomb killed Kate's mother. Her father worked that case. As his memory fades, he begins to let slip details of his past that will forever alter how Lucy sees him. But they also contain clues pertaining to the present investigation & when the bad guys are finally all rounded up there are a few surprises in store for the reader.

The author does a a great job of creating the atmosphere & tension of this small city that was once divided in two. All the characters have been touched by the violence whether it was themselves or a family member & many continue to harbour secrets. Some of them are obviously villains but there are enough red herrings & hidden agendas to keep the reader guessing as to the motives of others. It's only as the author slowly reveals the past that we understand what is going on now.

I really enjoyed this. The characters are well described & dialogue is tight, giving the book a smooth flow & even pace. History about The Troubles in this area (where it all began) is interesting & evocative, continuing to affect residents today. The scenes between Lucy & her father are increasingly heartbreaking as the disease takes hold & anyone with an aging parent or partner will empathize with their pain & regret.

Lucy is a compelling character. She's smart, responsible & you feel for her as she struggles to handle pressures from her job & home life. Events will force her to reexamine what she thought she knew about her parents & decisions they made. My only quibble was with her tendency to make impulsive decisions & mistakes more in keeping with a rookie than a DS. Still, I appreciated her quiet determination. No whiners here, thank God!

The ending is far from tidy which makes it more realistic. You get the sense she will come to terms with how the cases were resolved. Changes in her personal life may take a bit longer to get used to but at least her plate is now only half full. There are 2 more books scheduled for release this year & I'll definitely pick up the next one to see where Lucy's future leads.